Abi Gwynn explores why the Białowieża Forest is in crisis. 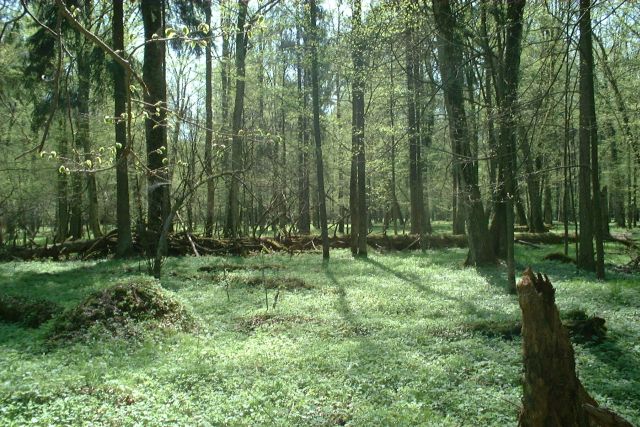 Białowieża Forest is known as the last primeval forest in Europe. This 141,885ha of ancient woodland on the border of Poland and Belarus supports the largest population of bison and tallest trees in Europe. It is the last stronghold for European bison, brown bear, moose and lynx, as well as a multitude of bird, reptile and invertebrate species, which until now were untouched by the modern human.

One of the rarest European woodpeckers, the white-backed woodpecker, is undergoing steep population decline in most other parts of Europe but is not of critical concern in the Białowieża Forest. This suggests the forest is large and diverse enough to support a viable breeding population. It is estimated that there are 135-150 breeding pairs within the national park making the Białowieża population one of the largest in Europe. Thus, it is important to protect Białowieża for the conservation of this species.

What is interesting and unique about Białowieża is that it has a high proportion of dead trees, which support an impressive diversity of saphrolytic insects and fungi. The dead wood is essential to the ecosystem as it is the very base of the food chain, providing a habitat and nutrients to the invertebrate decomposers. On decomposition of this wood, nutrients are returned to the soil to enable new things to grow. The decomposers are an important food source for birds, bats and small rodents that in turn are food for larger predators like lynx, owls and wolves.

However, the problem for Białowieża is that only 16% of the forest is protected as a national park. The forest’s recent publicity is due to the proposed logging around the UNESCO World Heritage Site. In March 2016, the Polish government proposed to triple the permitted volume of logging, which would cause the deforestation of an additional 180,000m3 of primary forest. Poland’s state forestry department suggests that logging is necessary to control the spread of the spruce bark beetle, which causes the death of spruce trees. However, nearly half of the species to be logged are of non-spruce varieties and the dead wood is essential to the ecosystem. This form of logging would remove the already dying trees, thus the timber is of hardly any use other than firewood.

There are many other ways to control the spread of the spruce bark beetle. For example, biological controls have been used all over the world in controlling other species and, in the UK, Rhizophagus grandis, a predator beetle, has been released to predate on the spruce bark beetle. Although biological controls can often be expensive to implement, R. grandis has been used extensively in forestry, thus is widely available and cheap.

We simply cannot stand and watch as our own continent’s last Eden is erased off the map. Logging of the forest would take with it some of the most iconic species of ancient European forest, such as bison and lynx, not to mention critically endangered species, which could be wiped from the planet altogether.

The Future is Nuclear: The Nuclear Power Debate and COP26

Are universities neglecting existing students to protect their income?

With the third anniversary of their climate emergency declaration approaching, a coalition of climate protesters gathered outside...
Read more
Sport